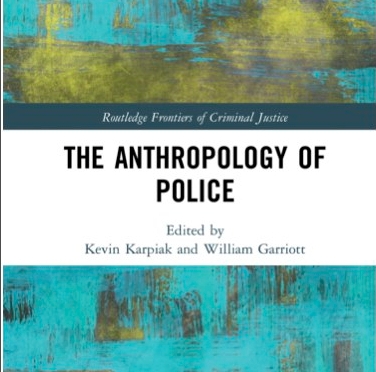 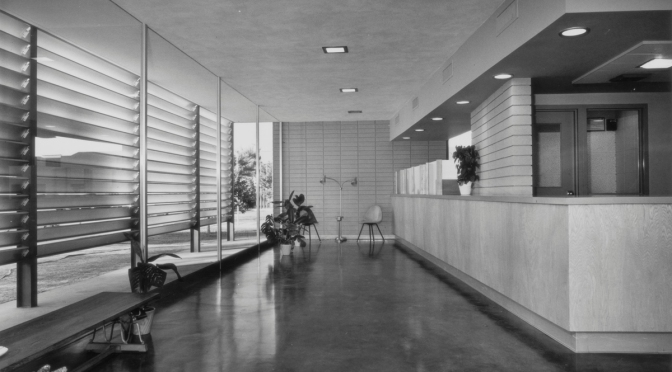 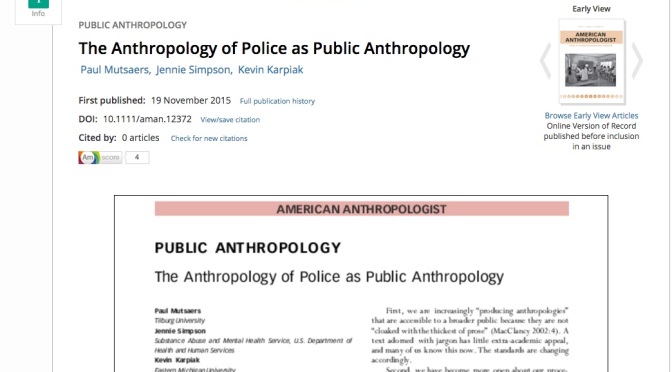 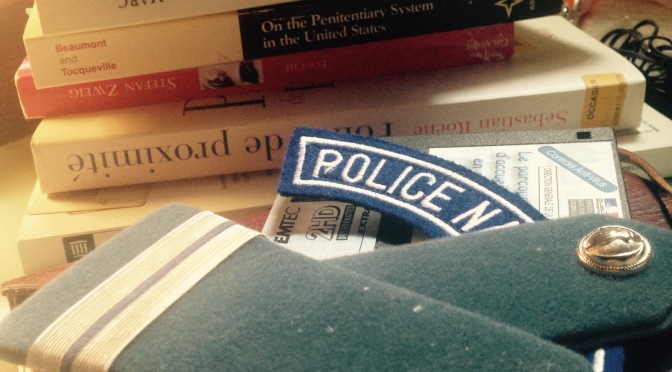 I circulated this letter raising pointed questions for police budgeting to various local representatives and organizations:

END_OF_DOCUMENT_TOKEN_TO_BE_REPLACED

Exertions, the blog of the Society for the Anthropology of Work, has published a new series of posts entitled “Policing and Labor.” Many wonderful people have contributed to it, so I suggest you check it out. My own, “What is the ‘Work’ in ‘Police Work’,” briefly explores some of the political valences of the concept of “work” amidst the police reforms that are the subject of my upcoming book The Police Against Itself. Here’s more or less the punchline:

END_OF_DOCUMENT_TOKEN_TO_BE_REPLACED

I’ve sent the following letter to my State-Level representatives (and aspiring candidates) today.  Fell free to copy, paste and edit as you see fit.

Recently Ann Arbor City Council passed a resolution (Resolution in Support of More Substantive Civilian Review of Policing Practices and Incidents) requesting our state representatives to move forward with a request to include citizen police oversight board members within the category of “law enforcement officials” for the purposes of allowing them access to the Law Enforcement Information Network (LEIN).  In my opinion, this was a measured and sound request both in terms of democratic participation and fiscal oversight (because citizens are not allowed access to the database currently, the AAPD has asked for and been granted a $170k/yr FTE so that a sworn officer can respond to oversight data requests.  We could save money, increase transparency, and arguably upgrade the available skill-set of that position if it could be filled by a civilian data analyst.

I was wondering what you are doing to move this issue forward?

In addition, in following the work of Ann Arbor’s Independent Community Police Oversight Commission (ICPOC) I have become aware of the Compulsory Arbitration Of Labor Disputes in Police and Fire Department Act 312 of 1969 and its effects on police reform in the state.  It is my understanding that this act gives police and fire unions a special status whereby an unresolved contract negotiation automatically enters binding arbitration after 30 days.  Whereas such arbiters typically resolve contract disputes by looking at prior examples, this is in essence a retrogressive law that makes it impossible to introduce even the most basic and popular reforms should they be found distasteful to the local police or fire union.  I would (1) urge you to make efforts in changing these onerous aspects of the existing law and (2) alert you to Senate Bill 0832 of 2020 and House Bill 5623 of 2020 which, shockingly, aim to extend these prerogatives to correction officers.  If there is anything I can do to help in these efforts, please let me know.

I’ve finally been reading bits and pieces of Donna Haraway’s Staying With the Trouble: Making Kin in the Chthulucene, which, I’ve been doing as part of a larger project to imagine the end of policing.

I had been meaning to do this for a while, but I was recently inspired her performance as discussant at a double panel at the American Anthropological Association Meetings I was a part of, honoring Aihwa Ong.  There were many wonderful moments there (one tidbit: Haraway, who became mega-famous for her essay “A Cyborg Manifesto,” declared that “Aihwa taught me more about cyborgs than anyone else.”  She was especially inspired by the complex entanglements of women and machinery in Ong’s first book, Spirits of Resistance and Capitalist Discipline) but it was actually one word that she kept using that stuck with me: critter. END_OF_DOCUMENT_TOKEN_TO_BE_REPLACED

I’ve recently published a piece of creative non-fiction–part of my forthcoming book The Police Against Itself–as part of the blog Somatosphere’s series “Notes on Guns and Violence.”  Below is an excerpt:

END_OF_DOCUMENT_TOKEN_TO_BE_REPLACED

Sometimes One runs across forgotten things in the nether regions of One’s hard drive.  Today I can across this piece, an “abbreviated adventure novel” I wrote over fifteen years ago. Reading it again now, as I try to put the final touches on my ethnographic monograph, I’m struck by the continued sense of (w)rote formalism and disjointed narrative that constitute my attempts at describing contemporary life.  Anyway here it is in its entirety: my first–still untitled–novel.

He didn’t know, one way or the other, any way of getting there.  Of course there was the usual way, but for that he didn’t have the stomach today.

“Charles, what’s the matter honey?  Don’t you have to go?”  Of course he did.  That was known.  If anything, knowing that was not the problem.

“What time is it?” he stalled.

Only later did it make any sense.

“You see, Turkmenistan had always had rather vague borders, let alone after the recent business with the Shah.  How else could One be expected to respond?” he said in the most surprisingly perfect English you’ve ever heard.  And after that, everyone could see the reason for his actions.

A jolly good laugh was had by all.

Meanwhile, back on the homefront, Gina had been waiting seventeen years for the #52 bus to come down Balmora Avenue and was beginning to wonder if it ever would.  However, being recently informed of the exploits of Col. Major Thomas Waterpaint IV in the hitherto unexplored regions of the Belgian Congo and the peripheral Asiatic Caucasus, she took it upon herself to summon the intestinal wherewithal to initiate a maneuver of her own accord, on par with anything the above-mentioned hero had yet seen fit to dare.

“Miss Linda,” she called out.  “I don’t think I’m ‘bout to set here and wait for the #52 Balmora Avenue Bus today,” as she ventured her foot, attached to its stout ankle away from her place on the curb.

“But Miss Gina!” Linda called out in the wrong direction, facing not the target towards whom her warning was aimed but down the row, her eyes reflecting the terror of what was appearing over the horizon.

“However, there is still one thing I do not understand, my dear Col. Major,” he said as he pored exactingly equal portions of an unspecified mixture of liqueurs into an unspecified number of vessels, “and that is how you could have possibly known what the Turk had been planning in the first place.”

“Quite simple, Mr. Harberry” he said venturing a sample from the proffered drinking vessel.  “Once I had heard of the unfortunate occurrences on Balmora Avenue, I knew there was only one possible course of action.”

“Yes, indeed” smirked the Countess, her haired pulled back tightly.

I’ve found the historical tidbit that finally merges the ca. 2000s secularism debates and the ca. 2010s ontology/human-animal debates in anthropology. It’s from Eric Hazan’s A History of the Barricade (Verso Books):

Henri III, who had previously been king of Poland, came to the throne of France in 1574 on the death of his brother Charles IX (the king of the St Bartholomew massacre). He was not popular, particularly in Paris, which at that time was very Catholic and traditional. His entourage was lampooned, the famous ‘mignons’ who passed their time in duels and debauchery of various kinds. He was attacked for his fantasies, his cross-dressing, his taste for lapdogs and exotic animals. Pierre de L’Estoile, gentleman usher to the chancellery and quite royalist in his sympathies, related in his diary that on 14 July 1576:

The king and queen arrived in Paris on return from the land of Normandy, from where they brought a large quantity of monkeys, parrots, and small dogs purchased in Dieppe. Some of these parrots, the majority trained by the Huguenots, gave out all kinds of nonsense and railing against the mass, the pope, and the ceremonies of the Roman church; when some people who had been offended said this to the king, he replied that you don’t interfere with the conscience of parrots.

You heard it here, folks: you don’t interfere with the conscience of a parrot. Fowl mouth and all.

On September 28th I will be giving a talk entitled “Electric Burns: attending the microphysics of police power” sponsored by the University of Cincinnati’s Department of Anthropology Colloquium and Taft Research Center

The editors of Anthropoliteia are happy to present the latest entry in on ongoing series The Anthropoliteia #BlackLivesMatterSyllabus Project, which will mobilize anthropological work as a pedagogical exercise addressing the confluence of race, policing and justice. You can see a growing bibliography of resources via our Mendeley feed. In this entry, Kevin G. Karpiak discusses the critical, […]

via The Anthropoliteia #BlackLivesMatter Syllabus Project, Week 12: Kevin G. Karpiak on the critical potential of an anthropology of police — Anthropoliteia

If you’re like me, you may have had two academic articles with seemingly conflicting arguments run through your Facebook feed lately.  The first, an article by Cody T. Ross published via PLOS ONE uses a multi-level Bayesian analysis to conclude that there exists

The other, written by economist Roland G. Fryer and covered extensively in the New York Times Upshot column, concludes that in the case of “the most extreme use of force – officer-involved shootings – we find no racial differences in either the raw data or when contextual factors are taken into account.”

How can such diametrically opposed claims be made simultaneously in reputable…