Just thought I’d give a shout out to what’s turning into an interesting conversation over at Savage Minds.org.  Guest blogger Dominic Boyer argues for greater anthropological attention be paid to “neosocialism” because:

If you look back on the entanglement of liberalism and socialism in modern European social theory and political philosophy, it makes no sense whatsoever to talk about the one without the other. If we think there’s something neoliberal out there then by goodness (!) there’s bound to be something neosocialist loose in the world as well. I admit that this is counterintuitive. We’ve all been schooled (not least by liberal and socialist theorists) to assume that liberalism and socialism are antithetical to one another. And, at some level, of course, there’s oppositionality there. But I’d argue there is also a strong relationship of complementarity between the two.

via Why not neosocialism? | Savage Minds.

Now this is an interesting enough kind of argument, and one I definitely agree with, but the discussion has also been particularly interesting, with Chris Kelty suggesting that perhaps the greatest example of the strength of this neosocialism might in fact be Walmart and (with a little provocation from your truly) Boyer making the claim that Bruno Latour, author of Reassembling the Social, is not in fact a social theorist (I’m still trying to wrap my head around that one to figure out if I agree or disagree).

I admit i came to this a bit late, but Michael Bérubé has written an article over at The Chronicle of Higher Education, entitled “What’s the Matter With Cultural Studies?”  that has caused quite a stir.

Now I hate to make light of the article, which I think is actually very good and extremely important, especially for those of us who are upset at what’s going on at the University of California right now–the article is extremely good at reminding us, not to get to Battlestar Galactica on y’all, that all of this has happened before.  Stuart Hall predicted Thatcherism before it happened, he reminds us, so looking back at how the academic left responded, what worked and what didn’t would probably be pretty helpful.  It probably would be most helpful, I think, for those of us state-side concerned with privatization of the university to read Policing the Crisis: Mugging, the State, and Law and Order (1978) and then Audit cultures: anthropological studies in accountability, ethics and the academy (2000) and make sense of what did and did not happen over there in the UK in between.

Having said all that, Bérubé does have a knack for punchy sentences.  My three favorite:

The last couple of weeks I’ve been teaching kids in my Intro to Anthropology class about one of the classic uses of the “culture” concept for anthropologists–to set off a domain of human life at least partially distinct from biology (think Margaret Mead in Coming of Age in Samoa or Alfred Kroeber‘s “superorganic” or any number of later examples).

My dissertation, on the other hand, looked at a different kind of “culture”: that which Nicolas Sarkozy, then head of the Police nationale, called “the culture of results”.  By this he meant a fundamental shift in not only the way government agencies conducted their affairs, but in the value orientations and work ethic of the French people writ large.

Needless to say, this was and remains a controversial agenda.  The latest issue du jour concerns a rash of suicides at France Telecom, which are being blamed on the aggressive “culture of results” style restructuring the former public service has been experiencing.  The Telegraph UK writes:

“In a nutshell, it’s gone from a public service culture to a cash machine,” said Ivan du Roy, author of Stressed Orange, a book about the company’s angst.

Union leaders blame the suicides on a brutal, target-obsessed company culture in which, they say, formerly well-qualified and adjusted employees – most in their 40s and 50s – are pushed around like pawns with the unofficial aim of “breaking” them so they will leave.

Some 22,000 have left in the last four years. But many remain and have been shifted into high-pressure call centres where individuals compete for monthly results-based bonuses.

The “culture of results,” it seems, is not only distinguishable from, but incompatible with, life itself as it understood by many of the employees of France Telecom.

The New York Times has been covering the trial of former Prime Minister Dominique de Villepin (and others) in what has become known as the Clearstream trial.  Basically, the accusation is that de Villepin faked a list of bank accounts, linked them to arms dealers, and then put Sarkozy’s name on it to try to ruin his political career and gain the presidency for himself.  If you remember, de Villepin was the guy who won the hearts of many on the American left when he denounced the U.S. war in Iraq at the UN.  He at one point was also the main political rival of the up-and-coming Sarkozy.

Anyway, something jumped out at me from today’s article that seems really important:

The trial itself has become a spectacle, given the Sarkozy-de Villepin rivalry, which also has elements of social and class prejudice. Mr. Sarkozy is a lawyer, while Mr. de Villepin went to elite schools, served as a diplomat, writes poetry but was never elected to any national post.

In 2004, for example, according to the magazine Le Point, Mr. de Villepin said, “Nicolas doesn’t have the makings of a man of state, because he has no interior labyrinth.” Mr. Sarkozy, he said, lacks “the mystery that is the strength of great men.” With Mr. Sarkozy, he added, “all is there, on the table, for the taking.”

“Some take this for arrogance, aggression,” he added. “In reality, it is weakness.”

There’s something there–about the role of language, both as an ethos and as a politics–that I think is very important, that I’ve been trying to capture in my own work, and that I think–if one properly understands the stakes of the problem–is very perplexing.

I’m all for poetry.  I’m all for beauty.  But labyrinthine politicians make me nervous, mostly because I’m a liberal in the classic sense of the term.  Jeremy Bentham, for example, equated metaphor with despotism in that it was a type of non-reasoning and therefore ultimately, as a politics, shear imposition of will.

The question I think is how to make sense of, and forge, a poetics for a post neoliberalism… 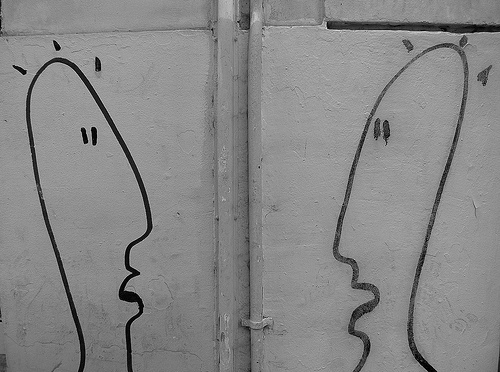 I just came across a neat blog called Decasia: critique of academic culture run by Eli Thorkelson, a graduate student in the anthropology department at the University of Chicago.  I started to offer a response to his though-provoking post on neoliberalism in the academy when I realized that really I was running on so long that my thoughts should be a post of their own.

In essence, Eli is trying to work through how to ask questions about neoliberalism from an ethnographic perspective–in other words, how to think through the contingencies and particularities of an object that itself traverses many such contexts.

Appropriately, I think, Eli and friends are trying to tackle this problem through the specific case of universities: how can we make sense of what seem to be linked issues–shared problems, if not exactly shared responses–in the very nature of academic practice today?  I ran into a similar issue when developing my dissertation project on police reform in France: so much of what was going on with Nicolas Sarkozy’s reform of the Police nationale seemed to follow a set script, but it wasn’t long into my time there that i realized that the issues at stake in his “culture of results” were different than, say, what was going on in Berkeley, or London.

How to make sense of this?

For starters, Foucault’s suggestion– in “What is Critique?” and elsewhere— has suggested that “liberalism” is best understood as a form of governance which seeks its own principle of limitation and therefore its corresponding form of critique–liberal critique– is to ask the question: do we have too much government?  In other words, continual and reflexive self-limitation on the power and scope of governance is the characteristic feature of liberalism across its various manifestations.  Beyond that, however, the particular mechanism of this self-limitation is variable.

If the first part of Foucault’s formulation (liberalism as form of self-limitation by government of governance) can be buttressed by the work of everyone from Albert Hirchman to Max Weber, the second part (thinking through the various mechanisms of liberal governance) is most fruitfuly approached, i think, by a group of scholars who follow the work of Nikolas Rose.

For example, rose argues that the distinguishing characteristic of neoliberalism is not “lack of governance,” “accumulation of wealth,” “excess of greed,” or even “privatization” (all popular definitions of the term).  rather the difference between “classical” liberalism and “neoliberalism” is that whereas the former sought a principle whereby the role of government could be limited through the cordoning off of separate “public” and “private” spheres, the latter attempts to use a set of techniques developed in the Market–located, for classic liberalism within the “private” sphere–to better regulate a variety of domains–including those classically relegated to the “public sphere”.

Now, several anthropologists–Aihwa Ong and Jim Ferguson being chief among them, I think– have taken up Rose’s work here in order to focus on the myriad ways neoliberal techniques have been taken up for purposes not predicted by grander theories of economic transformation.  Their point here is, I think, that neoliberalism is  a technical toolkit that can be used in the service of a whole array of political projects.

Now, having said that, in my own dissertation I argued that, while the police reform that I was ethnographizing was indeed a form of liberalism which made use of some of the management techniques usually associated with neoliberalism in the Rose/Ong/Ferguson post-Foucaultian understanding of the term, I’m not sure that it was the sole mechanism of self-limitation.

On the one hand, I think I’m “not sure” mostly because neither were the people I was studying.  in a very tangible sense, they were trying to figure out how to delimit the legitimate violence they were entrusted with.  On the other hand, this very fact seems to suggest that there was at least some kind of experimentation with another, yet emergent, form of liberalism.

Dr. Ong and I have been going back and forth a bit about this ever since: what, for example, I ask her, would a new form of liberalism look like, if it were neither “classical” nor “neo” liberalism?  Can we see any evidence of such a thing in the world around us?  For example, in the post-economic collapse U.S. where there at least circulates the idea that market techniques are not in themselves sufficient “regulation”?

This is the terrain I think Eli & co. are on as they try to think through everything from the University of California’s current economic crisis to Mexican student protests of the 1990’s to ethnic violence at Cameroonian universities.  It is exciting territory, and I’ll be interested to see what they find…